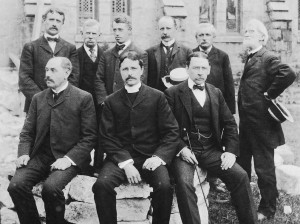 The beginnings of Christ Church Ridley Park are closely connected with the Philadelphia, Wilmington, and Baltimore Railroad. Presidents Samuel M. Felton (1851 to 1865) and his successor, Isaac Hinkley, both helped make possible the land and the building on which the parish is situated. Hinkley was a wealthy businessman who had purchased land in Ridley Township and in 1871 he formed the Ridley Park Land Association, making Felton its president (who served in that position until his retirement in 1884). Hinkley also hired Robert M. Copeland (1835-1874), a Boston landscape architect who laid out Ridley Park.

It was Copeland’s protege, Theophilus P. Chandler (1848-1928), who was chosen architect for Christ Church. After designing a few homes in Ridley Park, as well as the original train station and Christ Church, Chandler went on to design other churches and buildings on the East Coast. By the time he died in 1928, he was a world famous architect.

Christ Church was formed in 1873 and Bishop Stevens appointed a board of trustees to act in place of a vestry. Two of its original members were H.F. Kenny, General Superintendent of the P.W.& B.RR, and John Smith, the railroad’s resident agent. One might imagine these two men were influential in the church’s first services being held in the railroad station. In winter, however, the services were moved to a vacant store on Hinkley Avenue. (More than likely, it was easier to heat the store rather than the railroad station). 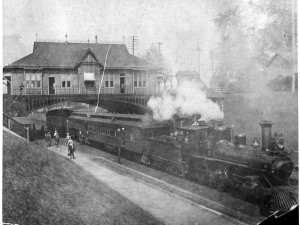 On June 16th, 1878, at 4 o’clock in the afternoon, the Ridley Park train station officially became the church’s meeting place, so ordered by Bishop Stevens. If a Sunday happened to be extremely hot, the station windows would be fully opened to allow fresh country breezes to waft through the building, that is, of course, until the whistle of the 4:15 Local was heard signaling its departure from the Prospect Park Station. At this time the church ushers would perform one of their mightiest miracles, closing all the windows before the steam engine and passenger cars came rolling to a stop beneath them. Even with all the windows and doors closed, the acrid, sulfur-smelling smoke would seep into any accessible cracks. For the Civil War veterans lounging on the porch of the Ridley Park Hotel (located at Swarthmore and Hinkley Avenues) exchanging war adventures, there was, no doubt, some appropriate humor about the “smoked Christians” up the road.

Trustees appointed by the Bishop decided not to build the church where the Bishop had already lain a cornerstone. This was due to a “mutual distraction” with the Presbyterians across the street. After presenting these facts to the Ridley Park Land Association, they were allowed to trade in their two lots on the corner of Swarthmore and Ridley Avenues, for three lots at Sellers Avenue and Nevin Street, which is the church’s present location. All prayers were answered, for in December of 1878, building commenced at the Sellers Avenue site, using stone from the Port Deposit Quaries, in Maryland. The structure was finished two years later in 1880.

From that point on, the church grew, and it shared that growth by starting and supporting missions in nearby Collingdale, 1888; Essington, 1903; Prospect Park, 1906; and Eddystone,1912.

The building would be later enlarged, once in 1902 and again in 1946. Additional structures would include a Victorian rectory and carriage shed in 1886. The shed, however, was converted to garages in 1920. A parish house was added in 1958 and the Memorial Garden in 1973. The sanctuary was renovated in 1989, at which time a free-standing altar was installed.

Share this page: History
Welcome About CCRP A Note from Our Rector What We Believe History Clergy & Staff Join