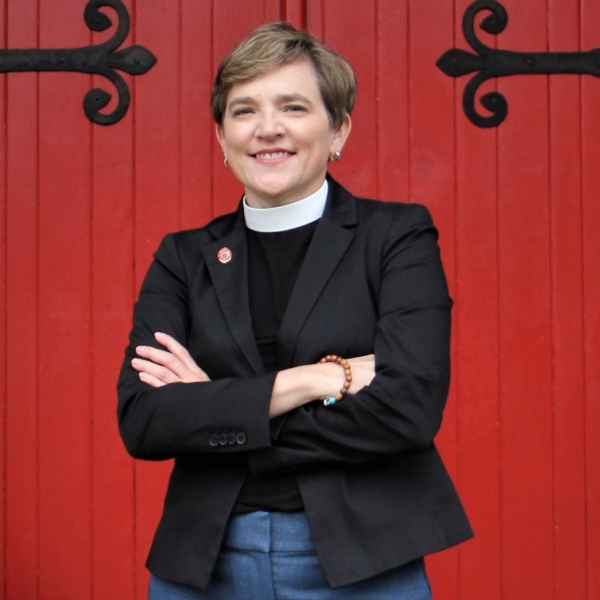 If we were to read in tomorrow's headlines that there was definitive proof that cats and dogs are actually an alien species sent to Earth to conquer us, that after all our 20th-century effort spent searching for alien life and it turns out they have been right here among us for thousands of years - that would change so much of how we imagine the universe. If we were to learn that they came from planet b359 and after a zillion years of clutch and grab they decided to play it differently - the symbiotic/parasitic long game. It would be a Caperinian revolution of thought and self-concept. The information would knock our socks off, and maybe confirm some suspicions. The most common sentence I utter in my house of me and three cats is ‘who is in charge around here’, and then I typically do what my feline overlords desire.

Our lessons today are full of astoundingly cosmic stuff and small everyday duties. The Revelation to John doesn’t say Jesus or Christ very much but he is the subject of almost all that artwork, it is a mixtape of a dream sequence in words of living color about Jesus’ saving presence as the Alpha and Omega - the A to Z. It is like that book or movie that both changed your life, and you don’t completely understand. The art of the Psalm is also cosmically profound. It is a kind of reprise, the way a musical mixes in words and chords from the other numbers at the finale of the musical. This Psalm is creatively tickling your memory of that grounding lesson about how the beginning began. Day one, good, day two good, and so on. It is boldly showcasing that the One Lord God, Yahweh, is the Creator of everything. All surveys about belief and religiousness that get taken in our time and place assume One prime mover, One ground of being. But it wasn’t so in the ancient world. The world was alive with an understanding of the cosmos and daily life as a polyphany of divine forces which were almost always geographically tied. The theological and ethical shift about Yahweh for the ancient Hebrew people from our big deal God of all, to being the prime mover of all was world reshaping. The psalm celebrates that with praise after praise after praise. The understanding didn't happen all at once. It rose up over time and was discerned in the community snd in the crisis of being ‘othered’ in the Exile. The idea was consequential to the 10th degree.

Peter’s revelation in the Acts of the Apostles lesson is also nearly as whoa as that, as astounding as my silly ‘Alien life is real and sleeping in your bed’ story. The conviction that the good news of all in Jesus’ life and death and resurrection Is not just for one province or ethnicity - is a reality that we assume but that the artworks of the New Testament are wrestling with. Ancient Judaism after the Exile to be sure understood Yahweh as the God of all that is, but they were not very often interested in making sure that everyone knew about it and joined in. The action-adventure drama of Acts of the Apostles creatively invites us into this radical new understanding and mission for the primordial church. Something we take for granted but for them was as shocking a shift as One Lord God of All - everywhere. And then today we also repeat the tremendous story Of Jesus’ mandate of love as one with God’s very infinite being and that our acting in love for those who have been othered Is the weight and measure of our faithfulness. Once again, just as as astounding as fur-baby conquerors.

I could go on .. but many of you are here because of little stuff. Infinitely precious love and bodies and lives. You are here because we are all called to give thanks to God for the gift of children and to reach into the profound depths of God’s love, reach in with all the generations of hope that connect us in baptism in a line going all the way back to the persons in that room with Jesus. We are here because of the desire to not face the complexities of life as a meaningless DIY project. Whatever has brought you here today, I am glad you are here. The facts of the moment are climate change and a pandemic whose terrors are not just biological and the forces of true evil, vicious othering of over half of us, daily dehumanization has latched onto human power and information structures, racist slaughter in a Buffalo grocery this weekend. Lord have mercy. Evil is using our weakness and trying blatantly to get the upper hand. The facts of the moment are also that wretchedness is being met, messily, imperfectly, by the people of God acting in deepest love for a better world.

Every text today is a work of art, and we forget that. We come to it with the thin lenses of equations and evidentiary hearings rather than like we have walked into an art gallery. I wonder is there a work of art that changed your whole understanding of everything? God gives us a way of life that is an astounding work of art, an improv art at times. Gives us hearts and minds and intellect and the ability to not remain lost in clutch and grab and terror. Christ invites all of us into the way to thrive and live in a timeless worldwide community that is always being led through the revolutionary changes of duty, thought and meaning. We make our way through it all with Jesus and the promises we repeat today: continue, return, proclaim, serve, strive. And one of the majestic truths of baptism into the life of Jesus is that we do it all, never alone in the vastness of everything, but always with the loving care of the One Lord God of all. Amen.

You can call me Reverend Jane.

Jane began her ministry at Christ Church in the fall of 2019, and is delighted to accompany people in their discipleship journey. Jane is the daughter of Army officers and has lived in either 15 or 16 states (depending on how you count), and West Germany. She graduated from the University of Mississippi (Ole Miss!) in 1995 with a Bachelor of Arts in Education, and a minor is Sociology. In 2003 she received her Masters of Divinity from the Church Divinity School of the Pacific in Berkeley, California, where she focused on Practical Theology and Adult Formation.

Before and after seminary, and before ordination, she served for over 20 years in the Episcopal Church in lifelong formation and ministry with young people. Jane was ordained in the best wine country anywhere, Walla Walla, Washington (Diocese of Spokane). Currently she serves with the Diocese of Pennsylvania on the Board of Trustees, Serviam leadership committee, and is an alternate deputy for General Convention. She has three cats: Glory, Poppy, and Molly, and enjoys visiting breweries with friends, reading and writing at coffee shops, and consuming both a gluttony of baseball (college and the Oakland Athletics), and soccer (USWNT and the Philadelphia Union). A book lover, book jacket reviews of Reverend Jane would say things like: inventive, erudite, genuine, ‘gets stuff done’, and ‘the most interesting church lady I have ever met.’